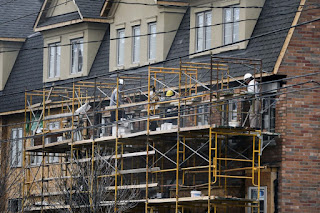 High rises account for most new construction sales in October, but prices are also rising.

The boom in condos and stacked townhomes pushed sales of new construction homes in the Toronto region up 18 per cent year over in year in October — accounting for 91 per cent of the overall 5,377 purchases.

The remaining 9 per cent of sales were low-rise, single-family homes, including detached, semi-detached and town houses.

A 70 per cent decline in the number of transactions in the low-rise category in October, compared to the same month last year, was accompanied by a 30 per cent increase in prices that averaged about $1.22 million.


That translates to an average price per square foot of $791 with the size of condos averaging 857 sq. ft.

The sales and price trends are a reflection of the declining choice for home buyers, according to BILD.

"We're still not building enough homes for the demographic reality of the Greater Toronto Area. Housing choice has diminished so markedly over the last 18 months to two years, even in the high rise market, prices are continuing to go up," said CEO Bryan Tuckey.