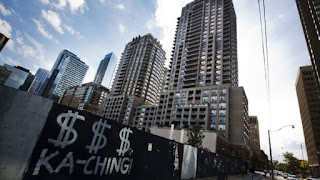 Sales down 34% overall but condo prices up by more that 20%, Toronto Real Estate Board says

Overall home sales in September were down in the Greater Toronto Area over the same time last year but condo prices continue to rise, according to figures released Wednesday morning by the Toronto Real Estate Board (TREB).

Even though listings were up by 9.4 per cent compared to September 2016, sales were down by 35 per cent, the TREB report said.

This follows a spring buying season in which the growth in Greater Toronto real estate prices slowed considerably, in the wake of measures taken by the provincial government to cool off the region’s red hot market.

But the board says the numbers indicate sellers think buyers are coming back to the market.

“The improvement in listings in September compared to a year earlier suggests that home owners are anticipating an uptick in sales activity as we move through the fall, TREB president Jim Syrianos said.

“Consumer polling undertaken for TREB in the spring suggested that buying intentions over the next year remain strong. As we move through the fourth quarter we could see some buyers moving off the sidelines, taking advantage of a better-supplied marketplace.”
But even with more supply of single-family homes, the supply of condos in the GTA is still tight and prices show no sign of cooling off.

“With more balanced market conditions, the pace of year-over-year price growth was more moderate in September compared to a year ago. However, the exception was the condominium apartment market segment, where average and benchmark sales prices were up by more than 20 per cent compared to last year,” said Jason Mercer, TREB’s director of market analysis. While the numbers have jumped, they’re not entirely surprising. Consumer polls conducted in the spring indicated a shift toward condominiums, Mercer said.

While the numbers have jumped, they're not entirely surprising. Consumer polls conducted in the spring indicated a shift toward condominiums, Mercer said.​

For information on buying or selling and the current real estate market, contact me by email or call 416-322-8000.
Posted by Your Davisville & Leaside Insider at 8:59:00 AM