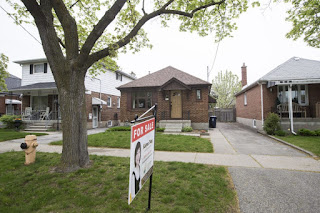 As the cost of Toronto-area housing rises, so do the financing challenges for young adults. Report says $200,000 a year is the average income needed for a detached house in Toronto.

It takes a six-figure income to afford virtually any Toronto area home — even a condo — and that expense is presenting a considerable financial challenge to an important cohort of millennial consumers.

Separate studies from two real estate companies on Thursday paint pictures of the high income requirements of affording a home, and of the housing aspirations of Canada’s “peak millennials” — adults 25 to 30.

It takes a household income of more than $200,000 a year to carry the $1.15 million cost of the average detached house in the Toronto region, according to a report from TheRedPin brokerage.

Even the average condo apartment, costing about $511,000, requires an annual income of $92,925 to afford a $1,933 monthly mortgage, plus taxes, utilities and condo fees, according to the report.

Meantime, 59 per cent of those aged 25 to 30 in Ontario would like to own a detached house in the next five years, but only 30 per cent think they will be able to afford one, according a new Royal LePage report based on findings by Leger research.

According to TheRedPin, buyers need more than $150,000 a year to cover the cost of a home in half of 22 Toronto area municipalities.

The average Toronto home price, $864,228, is affordable to buyers with an annual income of $147,750 — though that average may be skewed lower by the large number of condos on the market.

TheRedPin study averaged home prices over the first seven months of the year, and assumed a 20 per cent down payment and a 2.99 per cent mortgage, amortized over 25 years. The income requirements took into account the areas’ average utility costs and property taxes and estimated condo fees based on a 900-square-foot condo townhouse and a 750-square-foot apartment. 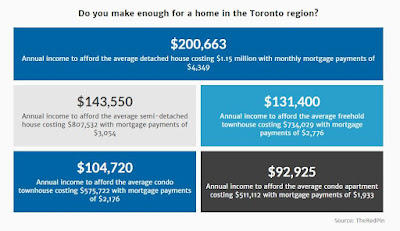 Click here to read the rest of this article....

Posted by Your Davisville & Leaside Insider at 9:11:00 AM

Bosley is around the corner

Visit My Other Site